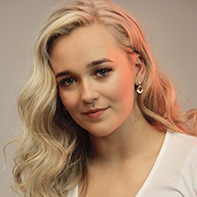 Abbey is what we like to call an ‘all­round performer’ and her triple threat talent has lead her to many professional opportunities in the industry. With experience in theatre, television, corporate entertainment, singing, modelling, hosting and teaching, Abbey’s knowledge and experience is hugely extensive. She has appeared on Channel 7, Nickelodeon, ABC, Universal Studios, Disney Channel and Shine Australia as both a dancer and actor in many commercials and TV series.
Abbey has also shared the stage with many big theatre names such as Magda Szubanski, Peter Everett, Sir Cliff Richard, Rachel Bee and David Hobson during her time in Snow White the Musical Extravaganza and Chitty Chitty Bang Bang which she performed over 45 shows during the Sydney season at the Capitol Theatre.
She has performed with talented artist such as Delta Goodram, and you may have seen Abbey around as the host of Nickelodeons ‘Ready Set Dance’ local shows.
She also starred on the Logie Award winning TV show ‘My Place’ in the role of ‘Adelaide’ shown on the ABC3 seen in schools around the nation.
Abbey has been training in dance since the age of four and in that time has completed her RAD Ballet Exams from Primary through to Intermediate, with distinctions in all grades. Abbey has also completed grades 1-9 in the Glenwood Tap Syllabus receiving a Gold Award (98% average) in every exam.
In recent years, Abbey has worked with many big name choreographers including her time working with Marko Panzic’s ‘The Dream Dance Company’. She is currently completing her Advanced Diploma of Performing Arts at ED5 International, majoring in vocals.