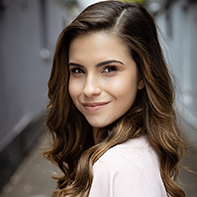 Chiara Assetta is an established singer, dancer, actor and choreographer. Trained at GY Dance and then went on to graduate ED5 International with a Diploma in Performing Arts.

As a Choreographer, Chiara originated the choreography for the Pre-World Premiere Australian production of The Dismissal (Squabbalogic) at the York Theatre. Most recently, she was also the co-creator and choreographer of the award-winning show, Siblingship, which was awarded ‘Best Cabaret’ in the BroadwayWorld Australia Awards of 2020. Siblingship played to sold out audiences at the Hayes Theatre Co and toured to Canberra, Melbourne and Parramatta. She has also choreographed for the leading performing arts institutions in Sydney, ED5 International and Ettingshausens Pro. Internationally, Chiara also has choreographed for entertainment events including Japan’s world renowned Japanese Latin Festival, held at Flamingo the Arusha, and the International Artists Concert in Osaka.

As a performer, Chiara was most recently cast in the Australian and New Zealand tour of Everybody’s Talking About Jamie. Her recent credits include Handa Opera Australia’s West Side Story on Sydney Harbour, in which she played the role of ‘Teresita’ and performing in Siblingship, alongside her brother Daniel. Further theatre credits include, the role of ‘Brian’ in the musical adaption of Terry Pratchett & Neil Gaiman’s Good Omens (Squabbalogic), the role of ‘Bride of Frankenstein’, ‘Hip’ and ‘Hop’ in the iconic Universal Monsters Live (Universal Studios Japan) and appeared as a Frog choir vocalist in The Wizarding World of Harry Potter (Universal Studios Japan).

Chiara’s film and television credits include Lynx TVC, Dance Academy and So You Think You Can Dance with Kelly Rowland. As a vocalist, she has performed the national anthem for the opening of the Bankwest Stadium, session vocalist for P&O Cruises and accompanied vocals for Delta Goodrem on The Voice and The Footy Show.