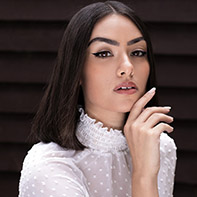 Jweles Mansour started dancing at the age of 3 and has trained in a variety of styles including Ballet, Tap, Jazz, Hip Hop, Commercial Jazz, Contemporary, lyrical, JFH and Musical Theatre. Jweles has completed all her RAD examinations achieving a high score in Advanced 2 and has completed all her Tap examinations. In 2015 she graduated from Newtown High School of the Performing Arts with a major in dance and drama. In 2016 she worked under the direction of Sarah Boulter and Lisa Bowmer at Ev and Bow Fulltime Dance Company receiving a Certificate IV in Dance and working with prestigious choreographers in the industry such as Adam Blanch, Adam Parson, Josh Thompson and Amy Campbell. In 2017 she worked with the Dream Dance Company’s Showbusiness under the direction of Marko Panzic and Katie Sanchez where she worked with many major Choreographers/Artists in the industry including Rhapsody James, Rob Rich, Kerrie Milne, Caetlyn Wateson and Kelly Abbey. During her time with the Dream’s Showbusiness she found her passion for choreographing and created a piece for the Showbusiness 2017 showcase. In 2018 she worked with Rhapsody James in her prestigious Dance Company, Motivating Excellence in North Hollywood Los Angeles where she learnt more about the art of Film Production and how to dance on set for famous music artists. During her time in LA she worked with Theatrical Director Nicco Annan, M.E Coordinator and Choreographer Charlot Mel, Jarred Jenkins, Tiadora Rivera and Film Producer and Creative Director of SpittnImage, Broadcasting and Media Production Company, Shawnette Heard.

Jweles’ admiration and passion for choreographing and performing on film has grown since her LA trip and has lead her to create her own artistic work while performing on set for other Film Producers such as Jennifer Rose CEO of Flying Kites Studios.