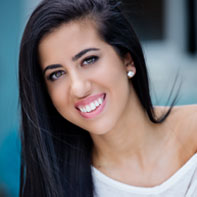 Originally from Sydney, Nicole began jazz and ballet at age 6 at a local dance studio. She completed her British Ballet Organisation examinations in jazz, tap, ballet and character up to Advanced level with distinction results. Growing up, Nicole spent her school holidays performing in children’s shows with “Showtime Attractions” and “RegProm Marketing” where she performed in Westfield Shopping Centre’s all over Australia.

In 2014, Nicole was accepted into ED5 International Full-time Performing Arts School where she completed a two year Diploma in Performing Arts and was trained in all styles of dance as well as drama and singing.  Nicole has appeared on television on “Home and Away”, has danced live on Channel Seven’s Sunrise for the “Kiss MS Goodbye” campaign, and  made it through to the semi final auditions tap dancing on Nine Network’s “Australia’s Got Talent”. Nicole has danced along-side Leo Sayer and Rhonda Burchmore for “Premieres Concert”, and was a chosen performer to dance at the “Arnott’s Camp Quality Ball” at the Doltone House. She has also modelled for “Karen Gee” Spring Races Runway”, and played a dancer/ zombie for a thriller themed “Fright Night” awards themed show at Carriageworks Productions.

Nicole has been teaching since the age of 13, and loves nothing more then seeing the progress in strength, technique and flexibility of the students develop!