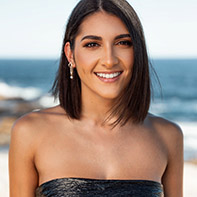 Tahlia began her journey through dance at the age of 3 and is still performing and dancing with the same passion. Tahlia grew up at GY and graduated in 2018. She then went on to pursue her passion at Ettingshausens Full Time where she was also awarded a Broadway dance Centre scholarship award to train in New York City for 3 months. In 2019 Tahlia also travelled to Los Angeles, Cuba and New York city to further her dance training among the industry’s best. Since graduating Full Time, Tahlia has been signed through Jeep Management which has led her to the honour of dancing for Dua Lipa at the Aria Awards in 2019, for Sam Smith Mardi Gras performance in 2020 as well as dancing alongside Katy Perry in the T20 Women’s Cricket final in Melbourne.